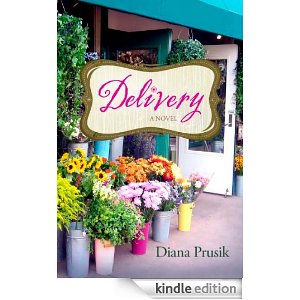 "Cents"able Momma put a great list together of FREE Kindle Books!
I thought it was such a great idea and want to share with all of you. Even if you do not have a Kindle, your smart phone may have the option to download a Kindle App.
Delivery by Diana Prusik
Livi finds new purpose in her troubled life when she joins her family's small-town florist shop.  There, the strong and wacky Wilson's Florist gang monitors the pulse of Mount Helicon, where customers carry stories even the local newspaper does not contain. Tales of birth and death, sickness and sorrow, love and betrayal, and even forgiveness—Livi hears them all. Privy to some of the community's deepest secrets, she sometimes wishes she didn't know so much, especially when news arrives that a dear family friend is dead. Faced with servicing his funeral, she is blasted with painful memories she's struggled for decades to ignore. Soon, guilt and grief over childhood and adult tragedies close in. Instead of turning to loved ones or God for comfort, she leans on alcohol, her long-time clandestine companion—but secrets rarely escape the close-knit flower shop crew, who makes Livi's business its own. Fumbling through life's challenges together, the Wilson gang often delivers more than flowers, yet when Livi needs delivery, can the bonds of faith and friendship dissolve her defenses?
Reinventing Leona by Lynne Gentry
Leona Harper loves being a pastor's wife. Her impressive resume touts thirty years of coaxing hot water from rusty parsonage plumbing, planning church potlucks, and standing beside her husband while members take potshots at his sermons. Except for the little tiff with her grown children, Leona feels her life is right on track with the wishes of the Almighty . . . until her husband drops dead in the pulpit.
When the church board decides to fill the Reverend's vacated position, Leona is forced to find a paying job, mend her fractured family, and tackle her fears. With life spiraling out of control, Leona might find the church members' antics comical if she weren't so completely panicked. Can the faith of an overwhelmed widow withstand the added heartache of two resentful children and several underhanded church members? If Leona can't trust God, how will she learn to trust herself?

When Livy O'Brien spies a young boy jostling a man walking along the boardwalk, she recognizes the act for what it is. After all, she used to be known as Light-fingered Livy. But that was before she put her past behind her and moved to the growing town of Chestnut, Illinois, where she's helping to run an orphanage. Now she'll do almost anything to protect the street kids like herself.
Sheriff's deputy Jake Russell had no idea what he was in for when he ran into Livy--literally--while chasing down a pickpocket. With a rash of robberies and a growing number of street kids in town--as well as a loan on the family farm that needs to be paid off--Jake doesn't have time to pursue a girl. Still, he can't seem to get Livy out of his mind. He wants to get to know her better . . . but Livy isn't willing to trust any man, especially not a lawman.


Hidden Steel by Doranna Durgin
Steve Spaneas doesn't have a clue.
Who'd have thought that the woman who stumbles her way into his gym, looking and acting so very much like a street person off her meds, is really a CIA case officer whose memory has been obliterated by experimental drugs used by some very bad people?
And seriously, who'd have thought that her attempts to untangle the few clues she's got would lead him right into her world of spies and counterspies, death and deception--and holy cow, stockpiled nuclear weapons?
But Steve had better figure out who he trusts--his years of experience on the streets, or the heart of a gritty woman determined to reclaim herself--and he'd better figure it out fast. Because suddenly there's a body out behind the gym, surveillance teams lurking, and a series of unsavory goons following the trail of a woman temporarily named Mickey right through his life.


Here is just a few of what I found. There are so many more and I will add a few more later. Please let me know if this is something you would be interested in seeing posted regularly. I hope you enjoy!
Posted by Rachel at 8:00 AM

Thanks for stopping by! Our goal is to help you build and maintain your stockpile.
{ -Shannan-} & { -Rachel-}
Founders of Savvy With Savings

The Coupons We Love

Proud To Be A Part Of: PNW Deal Bloggers